Hello Wise Warrior,
In the summer of 2015, I hit what I now refer to as my mid-life crisis – like a fly hits a window.
WHAM.
Big unexpected changes tend to happen in a chaotic, flurry but when you stop trying to outrun them or let go instead of being dragged along – things can get very still – very quickly.
Which is exactly what happened the week after my 42nd birthday. Sitting on my living room floor, I came face to face with ME and my new, eerily quiet life.
I stayed there on that rug with Merlin – my pup and the sun streaming in through the glass – that I just hit, for a very long time.
Earlier, I had decided that I was going to take a bit of time for myself that afternoon.
As I sat there somewhat frozen in the sunshine, I realized that I had one really big problem… I had no idea what to do. Furthermore, not only did I not know what to do – every time I thought of something, a wildly over exaggerated amount of resistance immediately surfaced.
For a gutsy girl who used to move countries in a week or shave her head on a whim… what happened?!!!
Well, it’s pretty simple… somewhere along the line, I stopped doing things and creating pathways for living outside of the box and my day to day responsibilities, to do lists and commitments. I shrank and my world did too.
I felt insecure and stuck!
I have a lot of tools in my toolkit for getting unstuck – it’s kind of what I do – help unstick people and challenges. My usual modus operandi  is to make a plan, so with a small wave of optimism I pulled out my journal, turned to a new page and titled it – “Get a Life Plan” and drew stars around it.
Then, staring at the blank page, I promptly burst into tears and lay on the carpet. Of course, Merlin took this as a sign that it was time to play and I immediately found all 100 lbs of him on top of me, licking my face.
As we wrestled, the tears dried and then a small voice rose up and said,
“Leah, if you want to feel different you have just DO SOMETHING DIFFERENT! That’s it. Don’t over think it. Don’t plan. Just DO it.”
And that’s when it started… I sat up and I tore out the GET A LIFE PLAN page and tossed it across the room. (And yes, Merlin promptly retrieved it.)
That afternoon, I made a deal with myself… that all I had to do was take inspired imperfect ACTION, choose ONE thing every week that was DIFFERENT and DO IT.
Little did I know that hands down it was going to be one of the best ideas I’ve ever had. Fast forward six months and here are just a few of the things I’ve done.
For almost every simple new thing I did, I was required to re-write an old story about why I couldn’t or shouldn’t or didn’t want to do it. Stories like… I’m not a good cook, I’m not spontaneous, that I’m not fit or young enough, that I don’t have time, that I can’t afford it, that it’s not important – that I’m not important.
You see… every time we do something different we are rewriting the stories that no longer serve us. We build trust and confidence in ourselves, expand our world and embrace who we are! We are saying YES to living NOW. To dancing with JOY!
This wasn’t a well thought out strategy. It was just an idea that came to me when I was desperately stuck in my stuff. I had no idea the profound impact it would have on how I experience my life. And because of this, I have made this a non-negotiable commitment to myself – forever.
I shared what I was doing with a few close friends and the response was consistently … “Wow – that’s cool idea, I want to do it!”  Which is what prompted me to share this with you too!
So, here’s my invitation to the DO SOMETHING DIFFERENT CHALLENGE for the rest of the year (or maybe the rest of your life).
It’s super simple…
Every week, take INSPIRED IMPERFECT ACTION and DO SOMETHING DIFFERENT. That’s it. You make your own rules.
Want to add some adventure to your relationship or family life? Invite your partner or kids to join you!
If you want to track it – great! If not, don’t.
If you want to share your DSD adventures and inspire others – awesome! Grab a friend for an adventure or take a photo and post it on your FB wall or Instagram. Hashtag it #dosomethingdifferent  / #inspiredimperfectaction. And if you want – tag me in it as I would love to know what you are up to and share ideas.
I didn’t set out to track my adventures. Quite frankly, I was just happy to be out of the house! But I did go back and find some photos that captured some of my experiences. 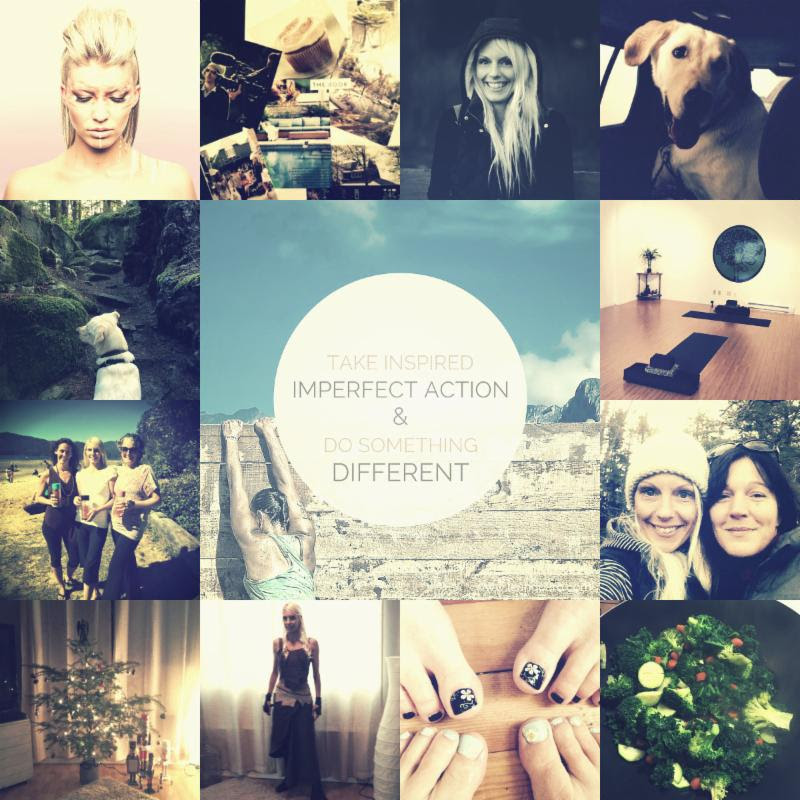 Each month, I’m going to share my DSD adventures here and weekly on social media and any ideas I have or ideas that are shared with me so we can adventure together.
Here’s to a year spent out of your box, filled with new adventures
and a whole lot more living!
Tweet
Share
Share
Pin